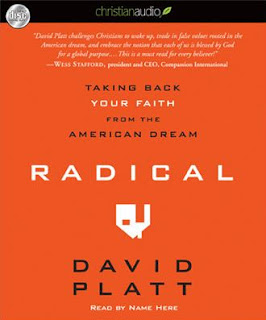 This book by David Platt is absolutely a must read for every Christian. I absolutely love the subtitle: Taking Back Your Faith From The American Dream! Not only does it challenge the importance on "stuff" in our lives but it will also challenge you to share your faith, not only with those around you but around the world as well! Part of the challenge presented by the book is also to pray for every country in the world so on top of everything else, your prayer life should be improved and increased after reading this amazing book. To learn more visit http://www.radicalthebook.com.

For where your treasure is, there your heart will be also.

Posted by SaulBecomesPaul at 8:14 PM No comments:

Now who is there to harm you if you are zealous for what is good?

Posted by SaulBecomesPaul at 6:50 PM 3 comments:

In "To the One Who Conquers", Sam Storms takes you through a 50 day devotional ride through the first couple of chapters in the last book of the Bible. He really helps open up the letters to the 7 churches in the book of Revelation and gives better understanding to the words given to these churches. In doing so, he has really inspired my walk and I hope that reading this book will do the same for you. I also recommend a series of sermons by Pastor Philip De Courcy titled "You've got mail"(from the drop down menus, select that series). The sermons and the book compliment each other very well. We hope that you will be blessed. Leave us some comments and let us know what you think of the book and the sermons.

He who has an ear, let him hear what the Spirit says to the churches. To the one who conquers I will grant to eat of the tree of life, which is in the paradise of God.'

Posted by SaulBecomesPaul at 8:50 AM No comments: