Why I am SaulBecomesPaul on Xbox 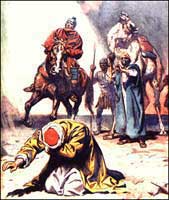 Why am I SaulBecomesPaul on Xbox? To me the conversion of Saul, killer and hater of Christians, into the apostle Paul is one of the most amazing examples of God's grace found in Scripture.   The story below from the book of Acts tells how Jesus meets Saul,  who was on his way to persecute believers, on the road to Damascus and completely changes his life.  Saul becomes Paul because Christ made him a "chosen instrument" of His in spite of all the evil he had done. Now this murderous, hateful, religious leader is going to go on and write a majority of the New Testament and spread the gospel in the midst of the same types of persecution he once brought upon the Church.  Amazing grace indeed.  God did the same thing for me.  I hated God and everything to do with Christianity.  He met me on my road to Damascus in a hospital room where my daughter lay dying.  He brought us both to life right there.  My daughter miraculously recovered and I was no longer dead in my sins and trespasses.  I am now on the right path thanks be to God.  How can you get on this narrow path that leads to life? The biblical call is to repent, turn from your sin and trust in Christ alone for salvation. I pray that this note is your road to Damascus and that God meets you here to put you on the right path. Every lie, theft, blasphemy, lustful look and hateful thought will come into account on Judgment Day.  The penalty is Hell.  Thankfully we don't have to go there.  God made a way that we can be forgiven all these things in Christ.  And He is the only way. In John 14:6 Jesus says, "I am the way, the truth and the life. No man comes to the Father except through me.  This is because Christ was fully God and fully man, making Him the perfect atoning sacrifice for our sin.  He got off the cross and 3 days later rose again defeating sin and death forever. All these years and countless born again believers later, His call remains.  Repent and trust in me.  Today is the day of salvation.  Don't put it off.  Tomorrow is not guaranteed.

9 But Saul, still breathing threats and murder against the disciples of the Lord, went to the high priest 2 and asked him for letters to the synagogues at Damascus, so that if he found any belonging to the Way, men or women, he might bring them bound to Jerusalem. 3  Now as he went on his way, he approached Damascus, and suddenly a light from heaven shone around him. 4 And falling to the ground he heard a voice saying to him, “Saul, Saul, why are you persecuting me?” 5 And he said, “Who are you, Lord?” And he said, “I am Jesus, whom you are persecuting. 6 But rise and enter the city, and you will be told what you are to do.” 7  The men who were traveling with him stood speechless, hearing the voice but seeing no one. 8 Saul rose from the ground, and although his eyes were opened, he saw nothing. So they led him by the hand and brought him into Damascus. 9 And for three days he was without sight, and neither ate nor drank.

10 Now there was a disciple at Damascus named Ananias. The Lord said to him in a vision, “Ananias.” And he said, “Here I am, Lord.” 11 And the Lord said to him, “Rise and go to the street called Straight, and at the house of Judas look for a man of Tarsus named Saul, for behold, he is praying, 12 and he has seen in a vision a man named Ananias come in and lay his hands on him so that he might regain his sight.” 13 But Ananias answered, “Lord, I have heard from many about this man, how much evil he has done to your saints at Jerusalem. 14 And here he has authority from the chief priests to bind all who call on your name.” 15 But the Lord said to him, “Go, for he is a chosen instrument of mine to carry my name before the Gentiles and kings and the children of Israel. 16 For I will show him how much he must suffer for the sake of my name.” 17 So Ananias departed and entered the house. And laying his hands on him he said, “Brother Saul, the Lord Jesus who appeared to you on the road by which you came has sent me so that you may regain your sight and be filled with the Holy Spirit.” 18 And immediately something like scales fell from his eyes, and he regained his sight. Then he rose and was baptized; 19 and taking food, he was strengthened.
Posted by SaulBecomesPaul at 11:16 AM No comments:

The Most Terrifying Truth of Scripture-Paul Washer

Posted by SaulBecomesPaul at 11:53 AM No comments: