Warning: Intended for Mature Viewers. Content may not be suitable for all age groups.

Visit http://www.180movie.com for more info and click HERE to order this fantastic documentary. Make sure you share this with your friends and family!! Lastly, be sure to "Like" the 180 Movie on Facebook by clicking here!! God bless, Team DiG

What people are saying about 180 Movie:

“We live in an age where Satan rules the pool of the internet and all of his “disciples” dive in after him. Well, God didn’t waste time dipping His toes in the water to chase them out of the pool. He cannonballs in with this amazing documentary on Hitler, the holocaust, and abortion and it’s party over for the devil and his pro-choice followers! There’s absolutely no limit to what God can do with this YouTube gem from Ray Comfort and Living Waters! Even amid the already present controversy surrounding the film, people’s minds will be changed not only as it pertains to abortion but also to the Gospel of Jesus Christ. The “180” has begun. ”- DiGoutreach.com

"This movie is awesome! Notice that those nay-sayers here can't argue with the logic of Ray Comfort! Instead they resort to name calling.... can't get past shallow thinking! For those that can think beyond the surface level of things, this documentary speaks volumes of truth about what is going on and the similarities to what happened in Germany."-Lee Ebbs

"This documentary does a GREAT job presenting the truth of the present-day holocaust and the gospel is presented clearly also, in keeping with the Great Commission. Well done!! If you have not watched "180" yet, what are you waiting for?"-Jeff Libby

"Great comparison, great documentary. Sadly, many will remain blinded by Satan (2 Cor 4:4). Pray that God would let them see and that He alone will be glorified by this powerful movie, "180"! Soli Deo Gloria"-Virgil Patterson

"Before I formed you in the womb I knew you"-God (Jeremiah 1:5)
Posted by SaulBecomesPaul at 6:05 PM 1 comment: 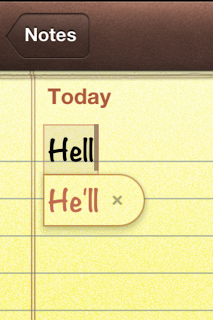 "If we spent 5 minutes in Hell, it would make an evangelist out of us"-Philip DeCourcy

Look at this picture and it will tell you a lot about where our society is today as a whole. Everyone wants to get rid of a little place called Hell. Even the spell check on my iPhone has gotten in on the act of trying to rid society the idea of this horrible, horrible place by changing Hell to He'll. With such an assault on this place that is the fiery eternity for the unrighteous, I am so thankful to go to a church that is not afraid of the doctrine of Hell. After all the Bible is clear that it is a real place, just like Heaven is a real place. Jesus, speaking of Heaven, says in John 14, "And if I go and prepare a place for you". Neither Heaven or Hell is just a state of mind like many in our culture would have us believe. Sadly even many in the church have fallen into thinking this way. Whether you believe that we are in Hell right now or that it's just a particular event in your life you go through, these ideas are not biblical in any fashion. Jesus spoke of Hell more than anyone. He spoke of a place where the "where their worm does not die and the fire is not quenched". A place where "there will be weeping and gnashing of teeth". Not only is Hell a real place, it is also an eternal, conscious punishment for those that do not repent and trust in Christ alone for salvation. Many who try to do away with the doctrine of Hell have come up with the idea of annihilation. The idea that people who don't come to a saving faith in Jesus Christ just simply cease to exist. That's what the people who come to your door on Saturday mornings believe. The concept of annihilation is worthy of cult status, not biblical Christianity. If you really think hard about it, does it really make sense that someone can do whatever they want their whole lives and just cease to exist? No eternal consequences for Hitler, child molesters, rapists and murderers. They get to have their own little "Heaven" on earth and then they are just gone? I don't think so and neither does the Bible. Consider the words of Jude, the half-brother of Jesus, in his epistle. And the angels who did not stay within their own position of authority, but left their proper dwelling, he has kept in eternal chains under gloomy darkness until the judgment of the great day— just as Sodom and Gomorrah and the surrounding cities, which likewise indulged in sexual immorality and pursued unnatural desire, serve as an example by undergoing a punishment of eternal fire. You see punishment, just like reward of Heaven, is eternal and Eternity is a long time to be wrong about Hell. I just want to finish by reminding you that the word gospel means "good news". The good news is that if you repent and trust in Christ you will have everlasting life. This gospel message only makes sense if there is a flip side, or bad news. The bible says that there is and that bad news is Hell. If we are in Hell now or if we are just going to cease to exist, then the good news doesn't make any sense at all. Pastor Philip DeCourcy's quote at the top of this page would mean nothing apart from Hell being a real place. The bible says we will walk the earth 0nce, then judgment. Sadly, our society takes God out of everything from schools to courthouses. Kids have almost zero knowledge of right and wrong. Now even the spell check on our "smart phones", which most kids are glued to these days, is trying to take away the idea of Hell. We need to make sure everyone we know understands that Hell is very real because Satan, the god of this world, will use everything in his "power"(yes, even spell check) to have you believe otherwise. Judgment is on it's way. The consequences of sin is God's wrath. Hell not He'll. Believers share the Gospel. Non-believers, please repent and believe the Gospel.