Conversation with an Evolutionist 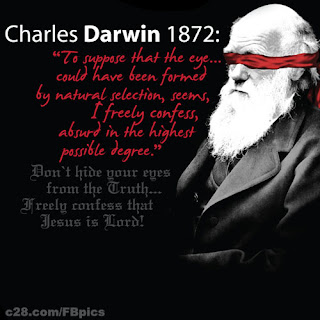 The following is an interaction between myself and two others with an evolutionist.  I am not posting this because I am some sort of great debater.  I'm not posting this to embarrass the evolutionist and have even substituted his name with Evolutionist or______.  I am posting this for two purposes.  That God be glorified and that people can see that you don't have to believe the lie that is evolution.  As you can see in the following conversation, zero evidence has been provided for the case of evolution.  This is always the case because there is no evidence anywhere for macro-evolution(species changing into another species).  You will always see transnational forms as some artist's rendering of the supposed beast.  Please read this and share with others.  Soli Deo Gloria!! Virg.

(Update, Evolutionist came back with supposed evidence, so to be fair I've added the rest of that conversation)

“Evolution is a fairy tale for grown-ups. This theory has helped nothing in the progress of science. It is useless.” - PROFESSOR LOUIS BOUNOURE (Director, National Center of Scientific Research) Posted by Original Poster

Wretched: What is is.

The Fossils Say What? - Answers in Genesis
www.answersingenesis.org


Posted by SaulBecomesPaul at 8:56 PM